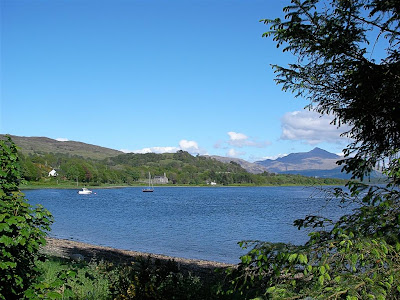 Looking east up Loch Etive towards Ben Cruachan. The church on the far shore is Ardchattan Kirk where there is a Scottish Homecoming exhibition of local historic photos and memories open all summer 2009.
Posted by Steve E of Benderloch at 10:00 pm No comments: Links to this post 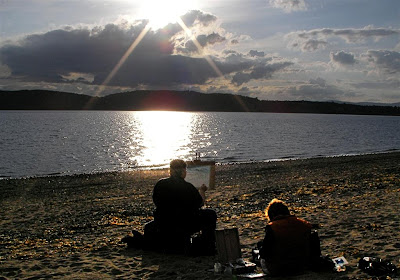 Two artists painting the evening view from the beach at Benderloch.
Posted by Steve E of Benderloch at 10:26 pm 1 comment: Links to this post St Modan's Church, Benderloch, taken in January with standard lens. The church is on a bend in the road with only a narrow pavement opposite as a place to stand and get the photo. I think the human eye takes in the scene more like the image below. 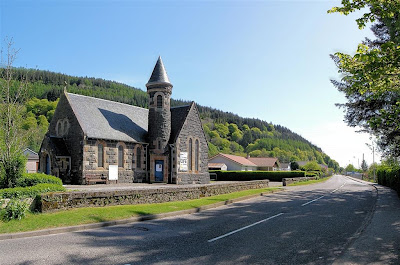 St Modan's Church, Benderloch, May 09.
Taken from almost the same spot as photo above.
Wide-angle lens effect without a wide-angle lens - achieved by taking nine photos in three horizontal passes and stitching in two dimensions using Autostitch (see post below for more info about the procedure).
Posted by Steve E of Benderloch at 12:17 am No comments: Links to this post 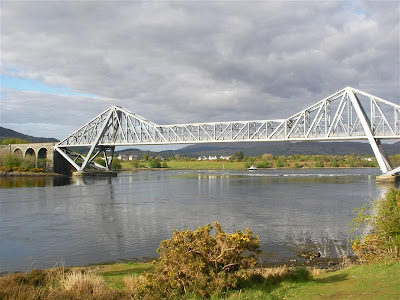 This is the standard view of Connel Bridge from the south side.
Its OK-ish but doesn't show the whole bridge and the clouds could be more interesting.

This was the more pleasing result I got from a set of fourteen photos which I stitched together. (Click image to enlarge.)

So this time I used a newish program called Autostitch (www.autostitch.net still in beta) It works in 2 dimensions to basically put a "jigsaw" of photos together, matching objects in the photos and adjusting for varied exposures. To complicate matters a little I wanted to emphasise the clouds and didn't have a polarizing filter. So I used my polarising sunglasses and corrected the colour cast later!

I took 14 overlapping photos of the scene (with an inexpensive hand held digital camera). 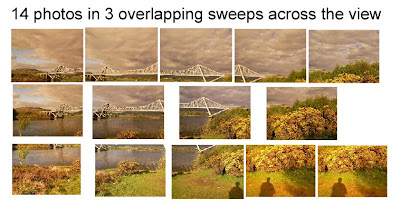 Just for interest I put them into a layout program and arranged them manually. 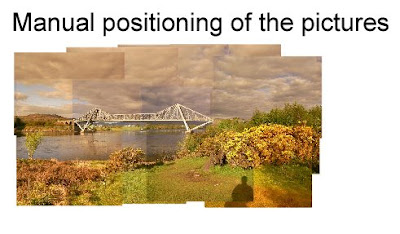 The photos laid out roughly in order. 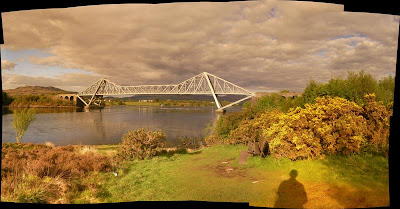 The Autostitch result.
There's no laying out involved with Autostitch - you start the program and tell it which photos to work with, optionally adjust some settings then sit back and let it work. It takes a couple of minutes at the default, small file size settings but for a complex, large image it can take much longer (about five minutes for this on my 1Gb RAM laptop).

Autostitch has rather a lot of settings to adjust but having used it a few times now I'm finding which produce a good sized (therefore detailed) image.
At this stage you can see the way it has merged the photos, adjusted curves and tonal values. The orange tint is from my polarising sunglasses.

Then I took the Autostitch image and put it through Photoshop to crop it down, cloned out a piece of litter and my shadow and finally removed the colour cast. The result is a 34mb TIF file which should print up nicely.
Posted by Steve E of Benderloch at 12:54 pm No comments: Links to this post

I selected these from a series of shots this evening. I liked the subtle sunset reflections on the clouds contrasting with the drama of the breaking wave. Having got unsatisfactory results with single shots I set the Nikon to take high-speed continuous pictures and selected these three of breaking waves. 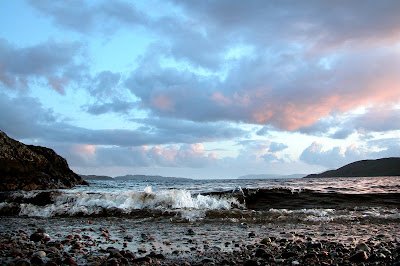 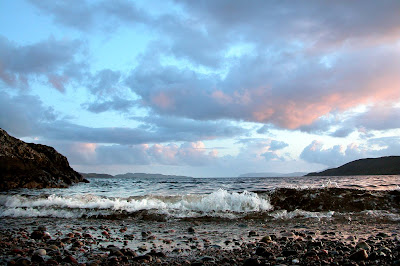 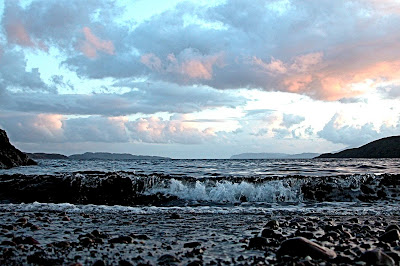 Looking at the wave I spotted this bubble which I thought interesting enough to show by itself. 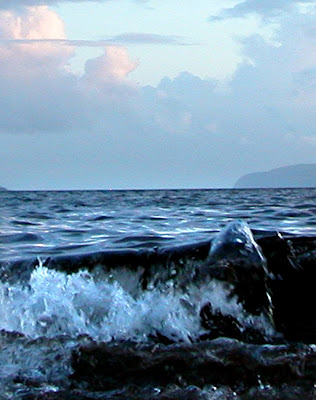 Posted by Steve E of Benderloch at 12:28 am 2 comments: Links to this post

Photos taken this May evening after several days of stormy weather. 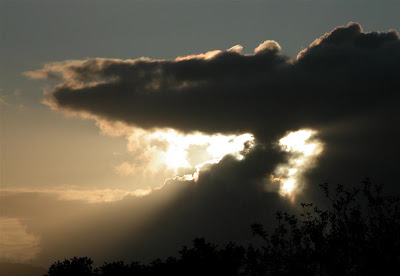 Looking up on the way to the beach 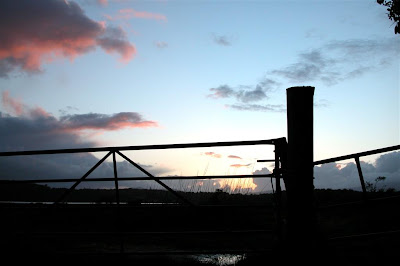 Through the gate to the beach 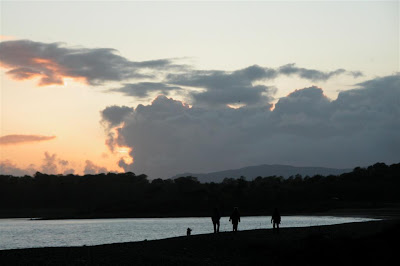 Walkers with dog - I had hoped to get myself in position to silhouette the walkers against the sea but I wasn't quick enough!
Posted by Steve E of Benderloch at 12:17 am No comments: Links to this post 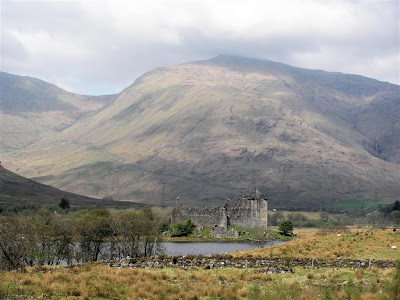 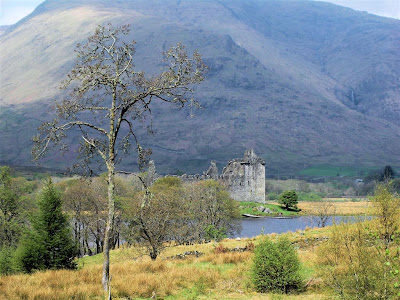 Two views over Loch Awe towards Ben Cruachan showing Kilchurn Castle - probably one of the most photographed castles in Argyll after Castle Stalker.
Posted by Steve E of Benderloch at 2:31 pm No comments: Links to this post 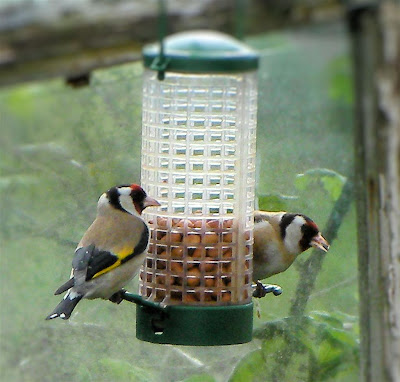 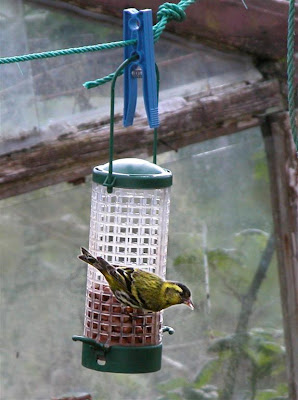 A pair of Goldfinches on the feeder which were chased away by this aggresive Siskin.
Posted by Steve E of Benderloch at 2:26 pm No comments: Links to this post