In the greenhouse. Peacock and red Admiral butterflies resting on the large leaves of a courgette plant. (Click on image to enlarge) 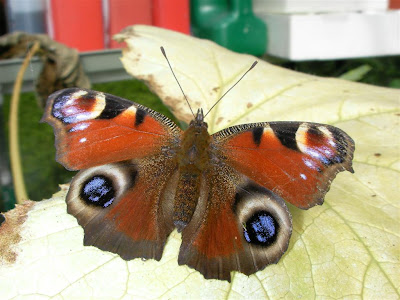 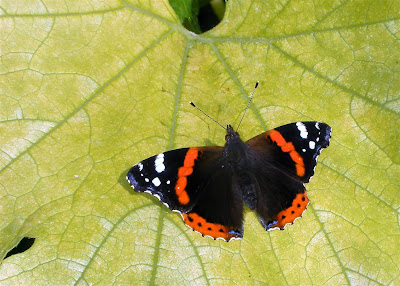 Red Admiral butterfly
Posted by Steve E of Benderloch at 6:30 pm No comments: Links to this post

The 50th annual North Connel and District Horticultural Show was held in Benderloch on August 22, 2009. This is a ten minute video of some of the exhibits and awards.
Posted by Steve E of Benderloch at 11:58 pm No comments: Links to this post 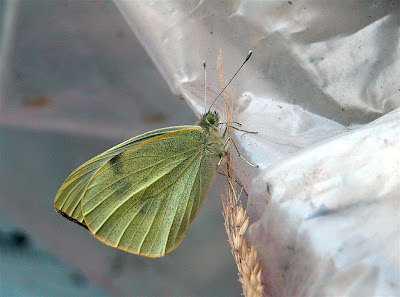 I believe this to be a Green Veined white butterfly. It landed conveniently on a sack of compost in the garden and I saw the ditinctive markings on its open wings. Of course, by the time I'd fetched the camera it had folded its wings but the markings are still just about visible. 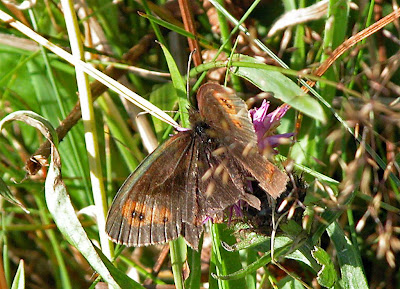 This one only comes out when the warm sun is shining. Its a Scotch Argus which have a fairly limited territory in Britain, being mainly seen in the Scottish West Highlands around August. So its spot on cue. This was one of several flying around the bushes at the top of the beach today. I was rather pleased as it's some years since I last saw one. It was just on the point of taking off when I got the shot - hence the opened wings. You'll notice the base of the nearer wing is damaged, as though something has taken a bite at it.
Posted by Steve E of Benderloch at 1:36 am 1 comment: Links to this post